The Pronunciation History Of Yahweh to Jehovah

How Yahweh Got Changed To Jehovah

In Hebrew the name of God is represented by the Tetragrammaton (“four letters”) יהוה (Yod Heh Vav Heh), transliterated into Roman script Y H W H; yehôvâh, yeh-ho-vaw’; H3068 From H1961; (the) self-Existent or eternal; Jehovah, Jewish national name of God: – KJV: Jehovah, Compare H3050, H3069. Since ancient Hebrew had no written vowels, it is uncertain how the name was pronounced originally, but there are records of the name in Greek, which did have written vowels. It is from these records that some believe the name should be pronounced “Yahweh” <1>One of the oldest Scriptural texts ever found contained the name Yahweh. A silver amulet dating back about 2,600 years (600 years before the birth of the Messiah) contains a seventh-century extract from the Book of Numbers (6:24-26). It was part of a treasure found by a Tel Aviv University archaeologist in a First Temple Period family tomb in Jerusalem. When this amulet was written the Temple of Solomon still stood, the heirs of King David ruled and the Dead Sea Scrolls would not be written for another 400 years. After three years of technological care, the amulet was unrolled at the Israel Museum. The name of Yahweh was clearly read. The Jerusalem Post issues 6-26-86 and 8-9-86 and the 6-87 issue of The Readers Digest). There is any number of reference books also that show evidence that Yahweh is, indeed, the name of the Creator. The New Unger’s Bible Dictionary, Revision of Unger’s Bible dictionary. 3rd ed. c1966. (Rev. and updated ed.). Chicago: Moody Press., states, “YAHWEH (yaʹway). The Heb. Tetragrammaton (YHWH) traditionally pronounced Jehovah (see discussion in the articles Lord; [The] LORD) is now known to be correctly vocalized yahwê. New inscriptional evidence from the second and first millennia B.C. point toward this fact. The old view of Le Clerc, later propounded by Paul Haupt and developed by W. F. Albright, has commended itself in the light of the phonetic development and grammatical evidence of increased knowledge of Northwest Semitic and kindred tongues. This thesis holds Yahweh to be originally a finite causative verb from the Northwest Semitic root hwy, “to be, to come into being,” so that the divine name would mean “He causes to be, or exist,” i.e., “He creates.” <2>Biblical Archaeology Review. Jan.-Feb. 1990, page 49- “BAR had published a beautiful carved ivory pomegranate with an important inscription on it. As partially reconstructed, the engraved inscription around the neck of the pomegranate reads as follows: “Belonging to the House of Yahweh Holy to the Priests.” Based on this reading, many scholars have concluded that the ivory pomegranate originally came from the Jerusalem Temple constructed by King Solomon.”. Shortly before the first century A.D., it became common for Jews to avoid saying the divine name for fear of misusing it and breaking the second commandment (“You shall not take the name of the Lord, your God, in vain,” Deuteronomy 5:11),  (See also: Was God’s Name Forbidden To Be Spoken? ). This resulted in the original pronunciation being lost. The name may have originally been derived from the old Semitic root הוה (hawah) meaning “to be” or “to become”. Whenever they read Scripture aloud and encountered the divine name, they substituted another Hebrew word, “Adonai” <3>Adonai (Heb.  Adhon  or Adhonay) means “lord” or “master” and is usually translated “Lord” in English Bibles. Adonai should be understood to mean “Lord of all” (Deut. 10:17), it is not God’s name. The word “Adonai” is used in Judaism as a spoken substitute for the ineffable (incapable of being expressed; indescribable or unutterable) name of God.(which means “Lord” or “my Lord”), in its place.

Eventually Hebrew developed written vowels, which appeared as small marks called vowel points and were placed above and below the consonants of a word. The Masoretes, who from about the 6th to the 10th century worked to reproduce the original text of the Hebrew Bible.

The vowels from Adonai (“Lord”) or Elohim (“God”) found their way into the consonants YHWH, thus forming “YaHWeH.” This was done to remind the reader of Scripture to say “Adonai” whenever he read “Yahweh.” (Ref Vowel Pointers below)

But this does not necessarily mean that was how God’s Name was originally pronounced. Any number of vowel combinations are possible, and the Jews are as uncertain of the real pronunciation as are Christians.

“Jehovah” is a much later variant in Latin (probably 12-13th century). Latin-speaking Christian scholars substituted the “Y” (which does not exist in Latin) with an “I” or a“J” (the latter of which exists in Latin as a variant form of I, also Hebrew does not have a “J” sound), and the “W” with a “V,” plus another vowel combination, resulting in “JeHoVaH,” which appeared when Christian scholars took the consonants of “Yahweh” and pronounced it with the vowels of “Adonai.” This resulted in the sound “Yahowah,” which has a Latinized spelling of “Jehovah.” As the use of the name spread throughout medieval Europe, the initial letter J was pronounced according to the local vernacular language rather than Latin. The first recorded use of this spelling was made by a Spanish Dominican monk, Raymundus Martini, in 1270. The NIV Study Bible, 1985, in its concordance page 87 states in a footnote to the entry “LORD” the following: “This entry represents the translation of the Hebrew name for God, Yahweh, always indicated in the NIV by LORD.”

> “LORD” represents the translation, but it is not an actual translation, since “Yahweh” does not mean lord or master.

> The word lord is not a name, it is a title which gives ownership. Men are known as lords (rulers). We know that Yahweh is the Ruler of us all.

Capitalizing the word “lord” (LORD) is misleading because it does not give any more meaning to the title than ruler or owner.

> The word god, is also a title, which the bible associates as “mighty”, a mighty being with supernatural powers.

By capitalizing god (GOD), is misleading because it does not give any more meaning to the title than mighty; there are many beings with supernatural powers (including demons and the devil). Note: The Hebrew Alphabet Does Not Have A Letter “J”

We know that the letter (J) has only been in the English alphabet a little over 500 years. Even as of today, there is no equivalent to the letter “J” in either Hebrew or Greek. Seeing these facts we know that the name of God was not written as “Jehovah” (or Jesus), at least not in Hebrew.

Changing The Hebrew Scriptures Into Greek

The Septuagint version translated the Hebrew scriptures into Greek. It was done about 200 B.C. in that translation the word YHWH was translated to the Greek word kurios (“Lord”). In the New Testament, whenever an Old Testament passage was quoted that contained YHWH, the writers used kurios in the Greek.

About 700 AD, Jewish scholars, known as the Masoretes, realized that knowledge of how to pronounce Hebrew was dying out. They introduced a system of vowel pointers above and below the text, so as to not change the actual sacred writings. These vowel pointers tell the reader what vowel sounds to use for the various words. Since YHWH was always pronounced Adonai or  adhon <4>See Ref. #3 – Adonai when read, the vowels pointers for adhon was placed around YHWH.

If the verse contained  adhon  yhwh, they then put the vowel pointers from the word Elohim (“God”) around YHWH. 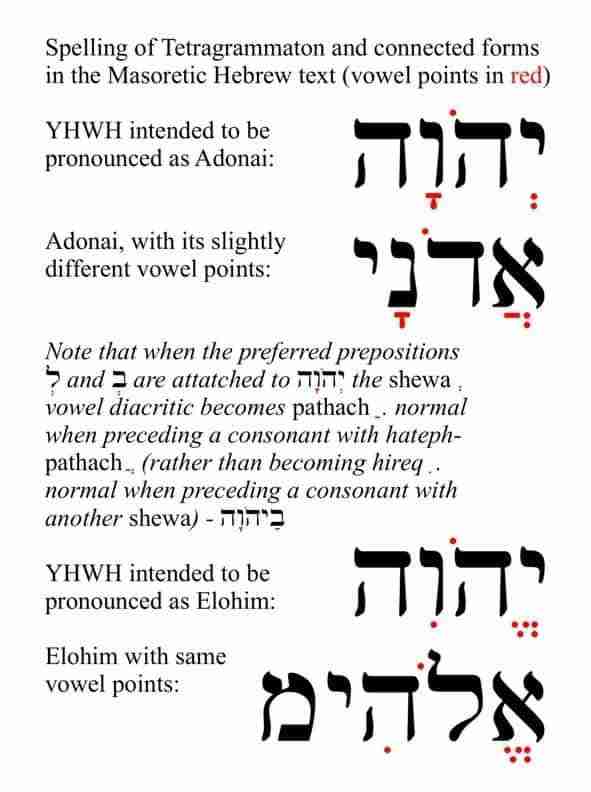 Jumping ahead to about 1200 AD, scholars transliterated the consonants YHWH into European letters of that era (JHVH) and then added the vowels, not knowing they weren’t the correct ones. Hence, “Jehovah” was born. It has the consonants of the original YHWH, but the vowels of the Hebrew word for “lord.” 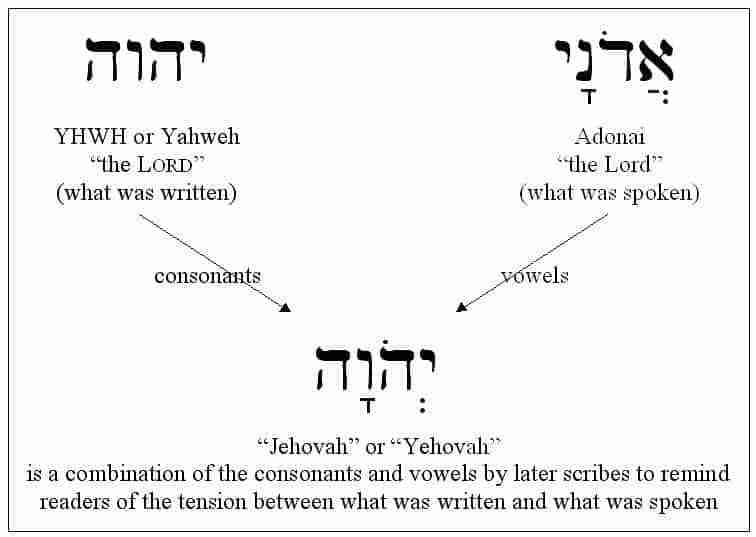 YHWH to Yahweh to Jehovah

When the King James Version was being translated, it was thought that YHWH was pronounced Jehovah.

The word YHWH appears 6,823 times in the Old Testament text. Most of the time the King James Version translated it as LORD, using capital letters to indicate it has special meaning beyond the English word “lord.” However there are several instances when it was transliterated as Jehovah; mostly to avoid places where the abbreviation for YHWH, “Yah” proceeded YHWH. Saying “the LORD LORD” was too awkward, so it became “the LORD Jehovah” (Isa 12:2, 26:4)

The use of all capitals is a convention used by translators to indicate that YHWH is behind the word “Lord” and not the normal Hebrew word adhon.

The KJV translators used the name “Jehovah” whenever the name Yahweh was found under one of the following three conditions:

Exodus 6:3 And I appeared unto Abraham, unto Isaac, and unto Jacob, by the name of God Almighty, but by my name JEHOVAH was I not known to them.

Ps 83:18 That men may know that thou, whose name alone is JEHOVAH, art the most high over all the earth.

Isaiah 12:2 Behold, God is my salvation; I will trust, and not be afraid: for the LORD JEHOVAH is my strength and my song; he also is become my salvation.

Isaiah 26:4 Trust ye in the LORD for ever: for in the LORD JEHOVAH is everlasting strength:

Genesis 22:14 And Abraham called the name of that place Jehovah-jireh: as it is said to this day, In the mount of the LORD it shall be seen.

Exodus 17:15 And Moses built an altar, and called the name of it Jehovah-nissi:

Judges 6:24 Then Gideon built an altar there unto the LORD, and called it Jehovah-shalom: unto this day it is yet in Ophrah of the Abi-ezrites.