That Rock Was Christ 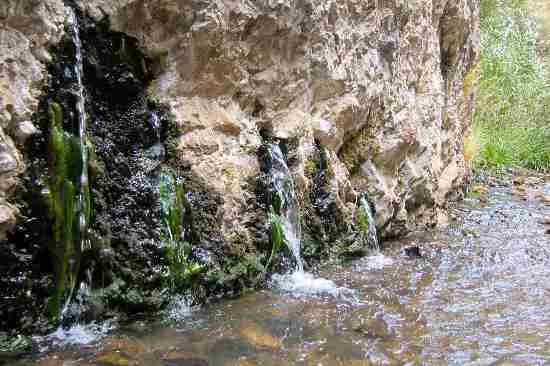 They Drank of that Spiritual Rock

And did all drink the same spiritual drink: for they drank of that spiritual Rock that followed (followed after) them: and that Rock was Christ (anointed).

(Paul is using an ANALOGY in this passage )

Note: Whenever we read the word “CHRIST” do not automatically substitute the name Jesus for the word “CHRIST,” because the word Christ is not Jesus’ last name. The words “Christ” and “anointed” both reflect the anointing of God Almighty that is placed upon or within someone or something; such as God’s Spirit dwelling within Jesus (John 14:10; Acts 10:38) or God supernaturally causing “drinkable water” to come forth from a rock, etc.. (Exodus 17:5, 6).

Paul, in 1 Corinthians 10:4, is alluding to the supernatural provision of water from the rock and drawing a spiritual parallel of those among Israel.

The literal physical rock in the Old Testament was a SPIRITUAL lesson TEACHING us of the coming of the CHRIST, the ANOINTED ONE, our Messiah, our savior, to those who had faith in the provisioning of God, the promised seed who was to follow them in time (some 1400 years later), which was Christ.

The Israelites continued their journey into the wilderness and eventually came to a place called Rephidim. Once again, there was no water to drink, and the people started complaining. God then ordered Moses to strike a certain rock so that water would gush out of it for the people to drink. The Bible notes that Moses “called the place Massah and Meribah (Exodus 17:7).

Forty years after this time of the smiting of the rock, when Israel had been journeying to and fro, waiting for the time to come that they might be permitted to enter Canaan, their wandering led again into this district, so barren and devoid of water.

But what happened to the gushing rock? The indication is that the rock did not stay at Rephidim, because sometime later, it is now in a different place — Kadesh — and a similar thing happened: water was miraculously produced when Moses struck a rock with his staff (Numbers 20:7-12). The text then adds, “These were the waters of Meribah” (Numbers 20:13). If these were the “waters of Meribah,” then that rock must somehow have moved from Rephidim to Kadesh!

First and foremost, Christ was never a literal rock or bolder. And this apparently very large rock probably did not roll around the ground following the Israelite people wandering through the wilderness.

Let’s first take a look at several other “figure of speech” passages having a similar contextual understanding.

John 4:10 (KJV)
10 Jesus answered and said unto her, If thou knewest the gift of God, and who it is that saith to thee, Give me to drink; thou wouldest have asked of him, and he would have given thee living water.

John 6:27 (KJV)
27 Labour not for the meat which perisheth, but for that meat which endureth unto everlasting life, which the Son of man shall give unto you: for him hath God the Father sealed.

John 7:37 (KJV)
37 In the last day, that great day of the feast, Jesus stood and cried, saying, If any man thirst, let him come unto me, and drink.

Most of us understand that these passages (John 4:10, 14, 6:27, 7:37) are not speaking about the physical substance we normally consume to help maintain our physical bodies.

Jesus told the Pharisees, the multitudes and His disciples that His flesh was the bread of life come down from heaven and if “eaten” they would never die (John 6:35-58). Jesus said that the bread He gave His disciples at the Lord’s Supper was His body and the drink was His blood (Matthew 26:26-28). Yet, this was not literally true.

We take communion by eating real physical bread, but we certainly do not claim that it has now been turned into real physical flesh protein of our Lord’s physical body. In other words, the bread did not magically metamorphose into something else physical (namely flesh); neither were they literally drinking the “blood” of Jesus. Jesus gave them literal bread and not His literal physical flesh. What that bread represented, and symbolized, was indeed, His body—however, it was not his physical body.

Mat 5:6 makes it clear that our appetite must be for righteousness.

“Blessed are they which do hunger and thirst after righteousness: for they shall be filled.”

That spiritual Rock that followed

1 Corinthians 10:4 on the other hand is often referred to as proof that Jesus was actually God.

Many translate the word “follow” (in 1 Corinthians 10:4) as if Jesus was literally “accompanying” the Israelites on their journey during their Exodus (Chp 17:1-6), but Paul is speaking figuratively.

It was in the wilderness where this great prophecy of the coming Messiah was given: “A star will come out of Jacob; a scepter will rise out of Israel,” and “their kingdom will be (which is yet to come) exalted” (Num. 24:7,17).

Christ was the hope of Israel, and those who looked forward to his coming were strengthened by their anticipation of the coming Messiah (Gal 3:7-8).

This understanding can be seen in Luke 9:23

“And he said to them all, If any man will come after me, let him deny himself, and take up his cross daily, and follow me.”

The word “follow” (in 1Cor 10:4) is the same word that Jesus used when He said, “take up his cross daily and follow me.” Again, this was not literally true. He did not mean for his disciples to follow him everywhere he went dragging a literal cross behind them (and they didn’t). It meant the same as it does today, that we are to follow after (pattern our life after) his ways.

Christ Was that Rock & I was that Son – But not literally!

We may speak in the same metaphoric manner today. In some of my sermon messages, I have mentioned that there was a time in which I went against my Heavenly father’s wishes. In giving my sermon message, which centered around a parable about a prodigal son (Luke 15:11-32) I stated that “I was that son,” although I was clearly not the same son Jesus spoke of during that time he was speaking (for I was not yet birthed), the statement I made was nonetheless true, figuratively, for I was that (“type of “) prodigal son of which this story depicts.

Hence there is a symbolic connection.

Although these types of passages can be somewhat challenging there are always comformation scriptures that we must never disregard and helps us to stay in alignment with the truth and what the Bible teaches us about God and Christ (God is always the “Almighty in all things” – John 14:28, 8:28, 12:50).

Luke 2:52 “And Jesus increased in wisdom and stature, and in favor with God and man.”