Was God’s Name Forbidden To Be Spoken?

Was God’s Name Forbidden To Be Spoken?

This is an important matter for two reasons; How can we witness to others about God, and how can you pray to a god, of whom you don’t know? 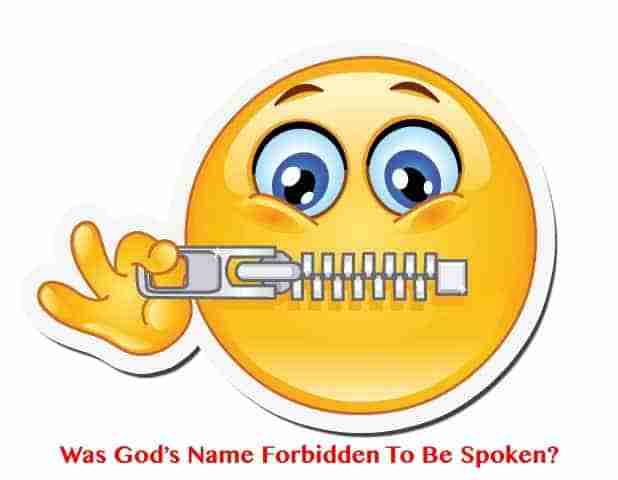 The Name Satan Doesn’t Want You To Know, To Speak or Tell Others

Why is Satan so happy today? He knows that you can’t spread God’s name [Yahweh] if you don’t know God’s name. The saying “You can’t share what you never had” is true. Satan doesn’t want you to be able to inform others!

The idea of not speaking God’s Name is rooted in superstition.

When, or why, the Jews began to avoid speaking the divine name of God is uncertain, but to imply that the prophets, the apostles or  Jesus (Yahshua) stopped using God’s name, YHWH (Yahweh), contradicts the Scriptures.

This Jewish practice does not actually come from the commandment, not to take the Lord’s Name in vain (Deut 5:11), as many suppose, although it is arguably the most frequently used justification. In Jewish thought, that commandment refers solely to oath-taking and is a prohibition against swearing by God’s Name falsely or frivolously (Lev 19:12, 20:3).

What I can tell you is that this particular Jewish custom, of not speaking God’s name, is not something that was instituted by God, it is a man-made practice. This Jewish practice never occurred during the historical time of the original writings of the Old Testament.

The prophets were never given instructions from God, nor did they command others, that God’s name was not to be spoken or written! Although Moses and the prophets had warned Israel not to profane the name of God (Lev 18:21, 21:6, the context was always regarding how they behaved, especially regarding idolatry. They profaned Yahweh’s name because God was associated with Israel, and they were so sinful.

It is evident from the scriptures that God’s Name was pronounced routinely. It is used over 6,800 times in the Holy Scriptures but, in many English speaking translations of the Scriptures, the translators used the word “LORD” (H3068) in the place of God’s personal name [YHWH (H3068) ].

The Name of God Is Given

15 And God said moreover unto Moses, Thus shalt thou say unto the children of Israel, The LORD (H3068) God of your fathers, the God of Abraham, the God of Isaac, and the God of Jacob, hath sent me unto you: this is my name for ever, and this is my memorial unto all generations.

15 God also said to Moses, “Say this to the Israelites: Yahweh (H3068), the God of your fathers, the God of Abraham, the God of Isaac, and the God of Jacob, has sent me to you. This is My name forever; this is how I am to be remembered in every generation.

God ends this conversation, (similarly in all translated Bible versions), by concluding;

“THIS is MY NAME forever, and this is how I am to be remembered in every generation.

God’s Name Is Spoken From Genesis through Malachi

Below is a small reflection of various other Old Testament passages, from Genesis through Malachi (the beginning and last books of the Old Testament), and the usage of God’s name [Yahweh] being spoken.

Gen 4:1  And Adam knew Eve his wife; and she conceived, and bare Cain, and said, I have gotten a man from the LORD.

2Sa 24:10  And David’s heart smote him after that he had numbered the people. And David said unto the LORD, I have sinned greatly in that I have done: and now, I beseech thee, O LORD, take away the iniquity of thy servant; for I have done very foolishly.

Nehemiah’s prayer was similar. He said in chapter 1 – “I beseech You, O LORD [Yahweh] God of heaven, the great and awesome God….” Neh 1:5 (NASB)

Jer 38:20  But Jeremiah said, They shall not deliver thee. Obey, I beseech thee, the voice of the LORD, which I speak unto thee: so it shall be well unto thee, and thy soul shall live.

Mal 1:1  The burden of the word of the LORD to Israel by Malachi.

Malachi, is the last book of the Old Testament. In this small book of only four chapters, the name “Yahweh” appears over 40 times. The name of God was never lost to the prophets who wrote the Hebrew Scriptures.

Jesus never hesitated to speak God’s name and taught the disciples to reverence His name.

When Jesus read the Scriptures in the Temple and synagogues he did so from Hebrew manuscripts, not the Septuagint.

The Hebrew manuscripts, even to this day, have the Hebrew word (הוהי) which is transliterated YHWH and pronounced Yahweh. Most English Bible translators decided to follow the Jewish tradition and not use God’s proper name. They replaced it with the word “LORD.” For some reason, those who translated the New Testament Scriptures into English decided to copy from the Septuagint rather than the Hebrew manuscripts and thereby eliminated God’s name, “Yahweh.”

When Jesus read the Hebrew Scriptures, he did not read the Greek word Kurios or the English word “LORD;” rather, he read what was written which is YHWH, Yahweh. We have no biblical or historical reason to believe that in the times of Jesus, the Septuagint would ever have been read in the temple or synagogues that were in Israel. The Jews would have taken issue with the holy writings being in any language other than their own. They resented and resisted the Gentile influences in the Palestine area.

Jesus explained God, according to John 1:18 (NASB) – “No man hath seen God at any time; the only begotten Son, which is in the bosom of the Father, he hath declared him.” And before his suffering and death, Jesus prayed to His Father and said, “I have manifested Your name to the men whom You gave Me out of the world.” Hebrews 2:12 (NASB) states: “I [Jesus] will proclaim your name to my brethren, in the midst of the congregation I will sing your praise.” How could Jesus make known God’s name if he was afraid to say it?

On two separate occasions, Jesus also taught his disciples how to pray. He said when you pray say, “Hallowed be Your name” (Luke 11:2 NASB). Jesus never considered that there would be a time when his disciples would not know the name of God as it is today. He never said, “Don’t speak God’s name” or “Never write God’s name.”

To keep God’s name “hallowed” means to keep it holy, consecrated, and revered, not keep it a secret.

Writing the Name of God

It is worth noting that this prohibition against erasing or defacing Names of God applies only to Names that are written in some kind of permanent form, and recent rabbinical decisions have held that writing on a computer is not a permanent form, thus it is not a violation to type God’s Name into a computer and then backspace over it or cut and paste it, or copy and delete files with God’s Name in them. However, once you print the document out, it becomes a permanent form. That is why observant Jews avoid writing the Name of God on websites like this one: because there is a risk that someone else will print it out and deface it.

The Jewish people try to avoid both speaking and writing the Name of God (including His titles) by substituting letters or syllables, for example, writing “G-d” instead of “God.”

Understandably, Satan doesn’t want anyone to know who God is, and when we knowingly misrepresent God’s true name, as if it belonged to someone else (Jesus), we are breaking 2 commandments of God. The Jewish practice may be well intended but has the potential of playing into the hand of Satan and his intent to deceive. There are two reasons why.

1). We are not to bear false witness.

Bearing false witness against anyone, or against God, is a sin. When a person says “LORD,” when the transliteration of the text is YHWH or when the translation of the text (YHWH) is  Yahweh or Jehovah, they are being dishonest with the text. To indicate to people that the word “Lord” (which is a title, not a name, and does not translate into YHWH) is the name of God to be honored, we are knowingly misrepresenting the text and are found to be liars. If your name is Bill and I tell someone else that your name is James, I am bearing false witness.

We are “bearing false witness” against God when we credit Jesus for the words spoken, and the many events God (YHWH) himself performed, in the Old Testament scriptures.

Note: Capitalizing the word “lord” (LORD) is also very misleading because it does not give any more meaning to the title than ruler or owner. This is important to understand, especially when we are asked the name of God.

Those who say “LORD” instead of “YHWH” (or Yahweh) are doing both of these evils. By not saying “YAHWEH” (or the original transliteration YHWH), they take away from it, and by saying “LORD” (which does not have the SAME meaning ) they add to it.

We must decide how we draw our conclusions about what we believe. We can be influenced by tradition or by what is written!