Father and Son – The Relationship Between Jesus And God 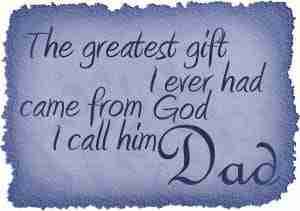 Who’s Your Daddy? – The Greatest Dad Is God!

Our Father, My Father, and Your Father

Whenever Jesus speaks of the “Father” or “God” the broader scope must always be realized. For example, Jesus said that He, the Apostles and Mary Magdalene (the prostitute) all had the same Father.

(Matthew 23:9) – And call no man your father upon the earth: for one is your Father, which is in heaven.

Given the statements made by Jesus as being true in what possible manner would Mary, the Apostles and Jesus all have the same Father? They certainly did not have the same fleshly (biological) father. The outpouring of the Holy Ghost had not yet taken place when these statements were made (Acts 2:1-17) therefore the indwelling of the Holy Ghost (God’s Spirit) did not reside in each of them (outside of Jesus). After considering the many scriptures which Jesus references God as his Father, we can conclude, they all had the same Father (being God), who is spiritual in nature (John 4:24) and in his relationship with man. (Rom 8:16, 21; Gal 3:26 & Luke 20:35-36)

Does the Interpretation Make Sense?

What is the control we use to weed out false theology and speculation? The controlling factors are logic and evidence. Interpretation is merely logical reasoning. When interpreting Scripture, the test of soundness should always be adhered to. (Titus 1:9; 2:1, 2, 8)

Father and Son reflect an individual’s Position in a Relationship

A man can be a Father and a Son, but he cannot be his own Father or be his own son!

In the Bible, the words Father and Son reflect an individual’s position in a relationship, but they are never the same person, nor does the Bible ever use it in that manner, and certainly not literally!

The word “Father” (regardless if it is speaking of God or man) is always reflected as someone who existed prior to their Son’s birth (or creation) and the Father was the means by which their son(s) were brought into existence or created (not the other way around). That means the Son did not exist before or at the same time as did his Father, outside of being a thought.

When we speak of Jesus as being “begotten” or God’s only begotten son, we understand that this term refers to the manner in which this child’s existence was brought into the world; in this case, a woman would birth a child (Galatians 4:4) that would be to him (God) a Son (Hebrews 1:5). Jesus was God’s ONLY begotten (birthed by a woman). A Son of God is clearly in reference to a totally different individual than God Himself, and why Jesus is called the “Son of…”

What Is A Son To God?

What we should agree on is:

1. A Son of God is a title that signifies a relationship with God, a title which was given to Jesus from God (Hebrews 1:5) and has been given to those of us who have been called or “born again” (Ref #2), it does not signify the existence of a little god  junior thereby making the existence of “multiple” gods. The Bible contains many verses that specifically state that there is only one God and that there is no other. (Deuteronomy 4:35, 4:39, 6:4; Isaiah 45:5-6, 18, 22; Ephesians 4:6)

4. God also made Jesus (Galatians 4:4; Hebrews 2:7, 9). Jesus is also considered to be a “genuine human” and the “Son of God” and the “second man” but because we know Adam had two sons (Cain and Abel) prior to the birth of Jesus we understand that this position as the second man is spoken from a different perspective than being the second human male species.

IMPORTANT NOTE: There are two factors that all “genuine humans” have in common.

2. A Dual nature; The second criteria is that all human beings have a dual nature, flesh and a human spirit, one given them of God, which is separate from that of being God himself.

Features Of A Spirit

We understand that our flesh is of the ground (Genesis 2:7; 3:19) but what about man’s spirit? Since man’s spirit comes from God (Numbers 16:22; Ecclesiastes 12:7), who is in heaven (Matthew 6:9), a good understanding of heaven and what exists there would be a good place to start. Angels live in this realm, or dimension we call heaven, along with God. (Matthew 18:10)

Biblically, a spirit and a man are always understood as being different types of matter. First, the (man) has flesh the other (spirit) DOES NOT “for a spirit hath not flesh and bone,” (Luke 24:39). Second, flesh dies/decays (James 2: 26) the spirit DOES NOT (Ecclesiastes 12:7) but flesh needs a spirit to live. Some spirits appeared as men but were not human (i.e., God’s angels). Unlike Jesus, they may have appeared in a fleshly state but they are not recorded as having blood or a human spirit/soul, Jesus had both (John 12:27; Luke 23:46; Acts 2:31-32)

Since the Bible says that angels have materialized visibly to men in the past, men such as to Lot and Balaam, this means it is possible for them to do so within our universe or dimension. Yet we also know that, even though our physical eyes cannot see their dimension, we can somewhat view it through our mind. Prophets of old did this with visions from God. Men such as Daniel, Isaiah, Ezekiel, and others were given instructions in this manner. Although angels can move through and in our dimension, we cannot, in human bodies, move into or physically see this dimension or realm that our Creator exists in. Our flesh and blood bodies were not designed with that ability.

Again all things are either God allowed or God arranged. Yet that does not make man God.