That Is Not In The Bible

It’s Not In The Bible

There are few sayings that have developed throughout the years that are frequently used in many sermons. Although they may sound biblical many are not. As with most lies the enemy uses, they usually originate from a misquoted or misapplied truth. Listed below are some common ones. 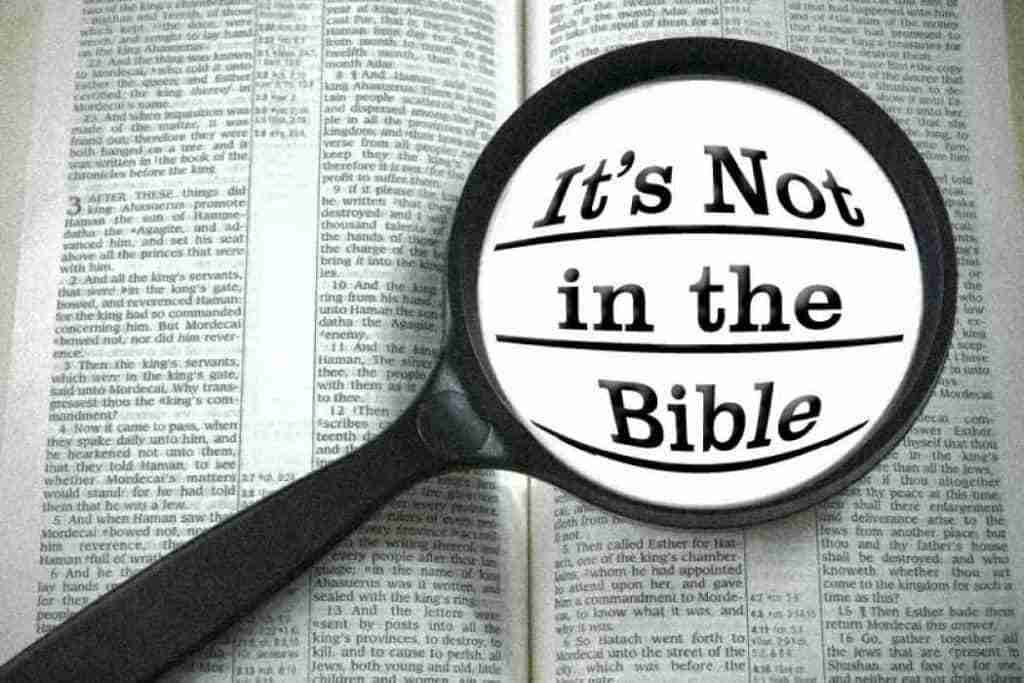 Add thou not unto His words, lest he reprove thee, and thou be found a liar.” (Proverbs 30:6)

Not Found In The Bible

Everyone Must Speak In Unknown Tongues (To Be Saved)

That is Not What the Bible Says.

(1 Corinthians 12:29-30) (1 Corinthians 12:29-30 NASB) For the record, I am a living witness that “speaking in tongues,” when it is caused by a move of God (the Holy Ghost), exists and is a real supernatural phenomenon. However, many of the teachings currently being embraced are based on man-made doctrines and not the word of God. (Ref: Speaking In Tongues)

God Will Cast Your Sins Into The “Sea Of Forgetfulness”

That is Not What the Bible Says.

(Ref: Does God forget our sins?)

Money is the Root of all Evil

“Money is the root of all evil” is how 1 Timothy 6:10 is often misquoted. A careful reader, however, knows that “the love of money” is the root Paul identifies, not money itself. This passage puts the focus on the heart, not on the amount of our resources.

Jesus taught in one of his parables that our possessions (money) should not possess us (be our master) in such a way that we become consumed by them and serve them above God.

"No one can serve two masters, for either he will hate the one and love the other, or he will be devoted to the one and despise the other. You cannot serve God and money." – Matthew 6:24 (ESV)

But those who desire to be rich fall into temptation, into a snare, into many senseless and harmful desires that plunge people into ruin and destruction. – 1 Timothy 6:9 (ESV)

Notice that Paul is talking about the desire to get rich and how easy it is to fall into temptation 1 Timothy 6:9 (ESV). This desire or craving for wealth often leads people to embrace senseless and harmful desires that end up ruining lives. In fact, at the end of verse 10, Paul says it is because of this craving that many have wandered away from the faith (the Christian life with all of it spiritual pursuits), and as a result, many are self-inflicted with unnecessary hardships, or griefs.

Spare the Rod, Spoil the Child

Despite popular opinion, the famous saying, "Spare the rod, spoil the child," is not found in the Bible. The saying, however, should not be considered invalid as there are verses that promote a similar concept.

Proverbs 22:15 - "A youngster’s heart is filled with foolishness, but physical discipline will drive it far away." Proverbs 22:15 (NLT)

This saying is based on what some call "The Doctrine Of The Perseverance Of The Saints" (a man-made doctrine).

Those who hold this belief, do not believe that a unconfessed sin can keep the "true believer" from receiving the same inheritance (heaven) as other saints, which they claim God has "sealed" in them by the Holy Spirit. Because of God's grace, they do not believe that a unconfessed sin will forge a breach in one's experience of the joys of a heavenly life. They believe every believer would be in danger because we all sin constantly in thought and deed.

Nonetheless, this statement is not true, nor is it a biblical concept. (Ref: Frequently Asked Questions About Salvation and Heaven)

God Will Give You No More Than You Can Bear

This statement reminds us of God’s care and concern for each of us. However, it is frequently misapplied to comfort individuals who may be going through a particular hardship. The truth is, however, that this statement is, in fact, both a misquotation of (1 Cor 10:13) and is often misapplied.

No temptation has overtaken you that is not common to man. God is faithful, and he will not let you be tempted beyond your ability, but with the temptation he will also provide the way of escape, that you may be able to endure it. (1 Cor 10:13 ESV)

It’s very important to understand a couple of things:

This passage is specifically talking about temptation and sin, not trials and not suffering.

God does not tempt anyone.

James 1:13 emphatically states, “Let no one say when he is tempted, ‘I am being tempted by God,’ for God cannot be tempted with evil, and he himself tempts no one.” While God does not tempt us, He does, in his sovereignty, permit us to be tempted. When Paul writes that God will not tempt us beyond our ability, he means that we are never in a situation where have no other choice but to sin. In a situation where telling the truth will damage your reputation, for example, it’s much easier to give in to the temptation to protect how people see you and lie, rather than do the right thing, which tells the truth. That’s why there’s no such thing as a “white lie”—one that you tell to protect the feelings of someone else or yourself. We never lie to make someone else feel better but to avoid a discomfort ourselves. It’s just easier to lie and not deal with the consequences of telling the truth.

God never giving us more than we can bear does not include being hated, betrayed, persecuted, or being killed… even in the name of Jesus!  Suffering to the point of death must not be mistaken as “more than we can bear,” since it is God Almighty who controls whether or not to allow any hurt, harm, suffering or death to take place within people’s lives. (All things are either God allowed or God arranged - Reference the book of Job)

√ John the Baptist suffers in prison until he is beheaded.  (Mark 6:27)

But Paul tells us why we endure suffering; we suffer with Him so we can be glorified with Him. (Romans 8:17) Paul also makes clear in (Phil 3:10-11) that he knowingly shares in the sufferings of Christ to the point of death so that he can share in the resurrection with Him too!

God Bled and Died on the Cross

That is Not What the Bible Says. (1Ti 1:17)  Now unto the King eternal, immortal, invisible, the only wise God, be honour and glory for ever and ever. Amen.  *Note:  Whoever you say God is, he MUST possess BOTH of these attributes, invisible and immortal, So if he DIED he was certainly NEVER GOD (the Almighty)!