Biblical Timeline of the Resurrection Rapture

It Is Not for You to Know The Exact Time


Just before Jesus was caught up to heaven, His disciples asked, “Lord, will You at this time restore the kingdom to Israel?” (Acts 1:6). Jesus said, “It is not for you to know the times or the seasons, which the Father hath put in His own power.” (Acts 1:7) If Christ, our Savior (the one who is coming back for us), does not know when he is to return, we are certainly not “more capable” than Christ of having this knowledge. This is important to always keep at the forefront of our discussion on this subject. Our Primary focus is to be “caught up” with Christ and not be part of those who do not make the rapture concerning the other debated issues.

We cannot truthfully say with 100% certainty the exact order of events to come. It should come as no surprise that not all Christians agree when the Millenium will occur or what it will be like. The following provides some of the arguments.

Premillennialists believe that Christ’s second coming will occur before the millennium.

Postmillennialists believe that Christ’s second coming will come after the millennium.

Amillennialists believe that the millennium is figurative and that we are already living in it.

We have attached a detailed Biblical timeline (PDF) with good illustrations and scriptures associated with this event.

We Do Not profess the Illustration below to be flawless or the most accurate “timeline depiction” but that it closely reflects the various stages and passages that should be taken into consideration.

The Rapture (The Expected Hope of the Saints) Summary of Events 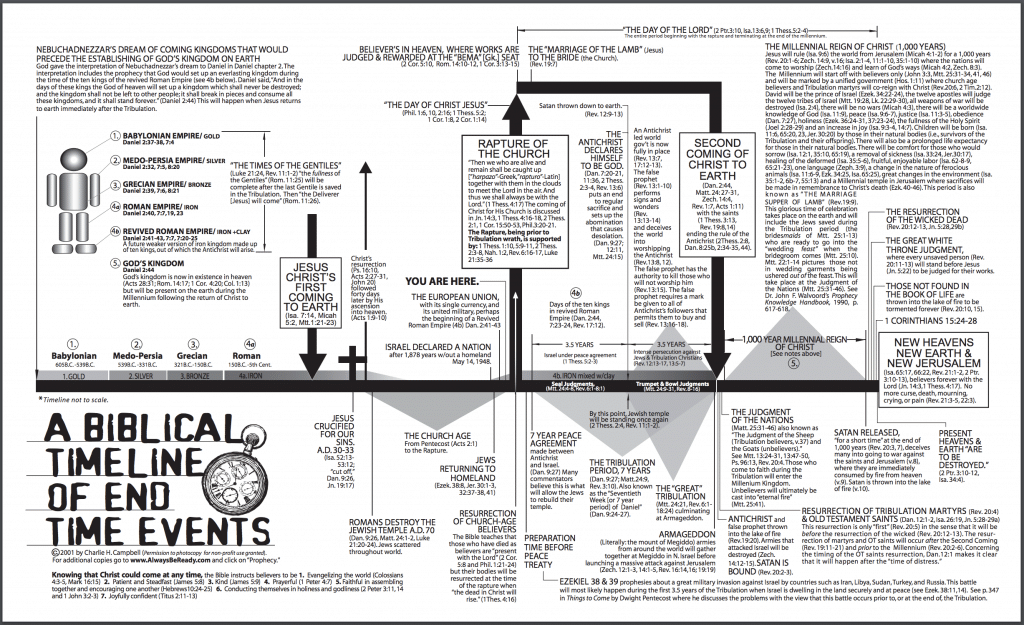 Most Christians believe that at some point in the future Christ will return again (the “second coming”), and that there will be a judgment of some sort, and this earth will end and all believers will be able to enter into / dwell with (or be with) our Father (God) up in heaven (God’s Heavenly Kingdom/dimension). Not that we will be limited to that dimension but that we will be able to dwell therein as we will at that time have an inheritance through Christ which makes us ONE as he was with God (John 17:21-22; John 20:17).

The word rapture refers to the Christian belief that the righteous will be taken alive by God from Earth to Heaven. This is differentiated from the common belief that when the righteous die their soul goes directly to Heaven. The hope of the rapture for Christians is to escape from the frightening End Time events described in the Book of Revelation which precede the return of Jesus Christ the Messiah to set up his reign.

Rapture is from the Latin rapio meaning to be seized by force, caught, taken. It is sometimes pointed out by critics that the word rapture does not appear anywhere in the Bible. This is partially true. Rapture is a Latin word, therefore, it does not appear in the Greek manuscripts of the New Testament. However, it does appear in the Latin Vulgate translation of 1 Thessalonians 4:17, the central rapture proof text in the Bible. The Greek manuscripts have the word harpagesometha a form of the word harpazo which like rapture means to be taken or seized.

The Rapture is described primarily in 1 Thessalonians 4:13-18 and 1 Corinthians 15:50-54. 1 Thessalonians 4:13-18 describes the Rapture as God resurrecting all the righteous who have died (1 Cor 6:14), giving them glorified bodies, and then they (those resurrected saints) will depart the earth with those righteous who were still alive, who have also been given glorified bodies.

“For the Lord (Jesus) himself will come down from heaven, with a loud command, with the voice of the archangel and with the trumpet call of God, and the dead in Christ will rise first. After that, we who are still alive and are left will be caught up together with them in the clouds to meet the Lord (Jesus) in the air. And so we will be with the Lord forever” (1 Thessalonians 4:16-17) See also: (John 14:2-3, Rev 3:21).

(As you can see the Bible explicitly describes Jesus coming down “descending” from Heaven and we the saints will be “caught up” to the sky experience when Jesus returns and comes for us, his Bride/we the Church)

Is There A Difference Between The Rapture And Second Coming?

There is often some confusion addressing the return of Christ. The question should be when Christ returns to do what?

One is a gathering up of the saints, his “symbolic” bride (we the church/the saints), who will be caught up to meet him in the air/cloud. This is different from what many call the “Second Coming” of Christ, which is when Christ returns with the saints to earth where he will reign for 1000 years.

Therefore, further clarification is advised because neither of these terminologies is found in scripture yet we often use them interchangeably creating potential confusion if we do not make clear how we define these two events.

There are several important differences between the Rapture and the Second Coming of Christ:

The Second Coming of Christ will not happen until after certain specified end times events take place (2 Thessalonians 2:4; Matthew 24:15-30).

During the Second Coming, believers return with the Lord to the earth (Revelation 19:14).

The Rapture occurs before the Tribulation. (1 Thessalonians 5:9; Revelation 3:10).