Jesus is never portrayed as God, the God who made a covenant with Israel.

The Tabernacle was the place where, at one time, God dwelt among his people (called the children of Israel). 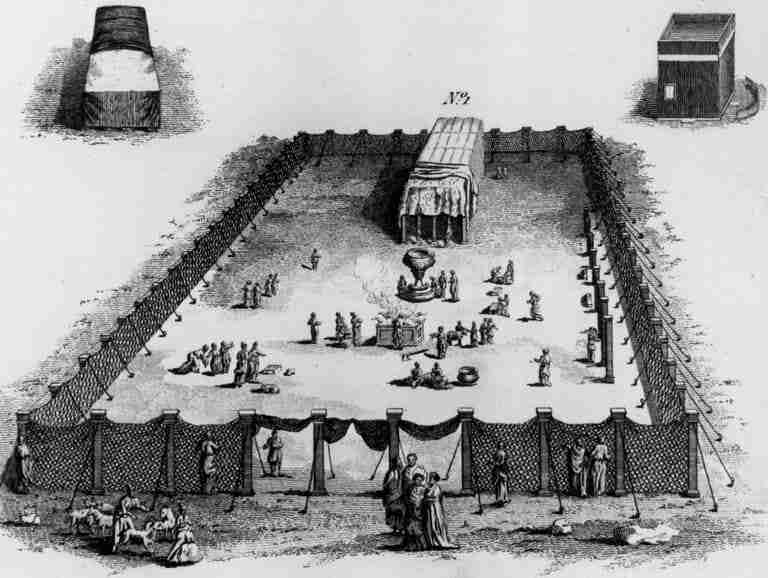 The tabernacle was a portable place of worship God commanded the Israelites to build after he rescued them from slavery in Egypt (Exodus 25:8-9). It was used from a year after they crossed the Red Sea until King Solomon built the first temple in Jerusalem, a period of 400 years.

After its creation by Moses, the Ark  (pictured below) was carried by the Israelites during their 40 years of wandering in the desert. Whenever the Israelites camped, the Ark was placed in a separate room in a sacred tent, called the Tabernacle. The tabernacle was situated in the very center of camp, with the 12 tribes encamped around it. The Most Holy section was screened off from the view of the priests and the people (Exodus 40:3, 21). Only the high priest could enter this compartment, one day each year on Atonement Day, and see the Ark (Leviticus 16:2; Hebrews 9:7). During its use, the tabernacle was moved many times. Everything could be packed into oxcarts when the people left, but the ark of the covenant was hand-carried by Levites.

The tabernacle’s journey began at Sinai, then it stood for 35 years at Kadesh. After Joshua and the Hebrews crossed the Jordan River into the Promised Land, the tabernacle stood at Gilgal for seven years. Its next home was Shiloh, where it remained until the time of the Judges. It was later set up in Nob and Gibeon. King David erected the tabernacle at Jerusalem and had the ark brought from Perez-uzzah and set in it.

The tabernacle and all its components had symbolic meanings. Overall, the tabernacle was a foreshadowing of the perfect tabernacle, Jesus Christ. The Bible constantly points to the coming Messiah, who fulfilled God’s loving plan for the salvation of the world:

We have a High Priest who sat down in the place of honor beside the throne of the majestic God in heaven. There he ministers in the heavenly Tabernacle, the true place of worship that was built by the Lord and not by human hands. And since every high priest is required to offer gifts and sacrifices, our High Priest must make an offering, too. If he were here on earth, he would not even be a priest, since there already are priests who offer the gifts required by the law. They serve in a system of worship that is only a copy, a shadow of the real one in heaven. For when Moses was getting ready to build the Tabernacle, God gave him this warning: “Be sure that you make everything according to the pattern I have shown you here on the mountain.”

But now Jesus, our High Priest, has been given a ministry that is far superior to the old priesthood, for he is the one who mediates for us a far better covenant with God, based on better promises. (Hebrews 8:1-6, NLT)

The Ark Of The Covenant

(Ark Of The Testimony)

The Ark was associated with God’s presence. For example, the cloud that appeared over the Ark in the Most Holy and at Israelite encampments (Fig. 2) was a sign of God’s presence and blessing. (Leviticus 16:2; Numbers 10:33-35) 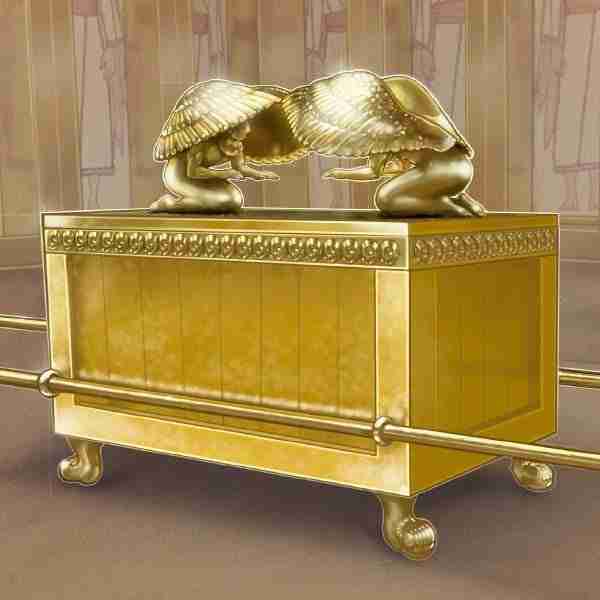 According to the Book of Exodus, during the Israelites’ wanderings in the desert, after their exodus from Egypt, God made a covenant (a conditional covenant) with the children of Israel through His servant Moses. He promised good to them and their children for generations if they obeyed Him and His laws; but He always warned of despair, punishment, and dispersion if they were to disobey. As a sign of His covenant, while the Jews were still camped at Sinai, He had the Israelites make a box according to His own design (Exodus 25:10-22; 31:18; 37:1-9; 40:20) (Law of Moses[the civil law written by Moses—the law of Moses, not the Ten Commandments written by God on stone tablets] Deuteronomy 31:24-26, 2 Kings 22:8). 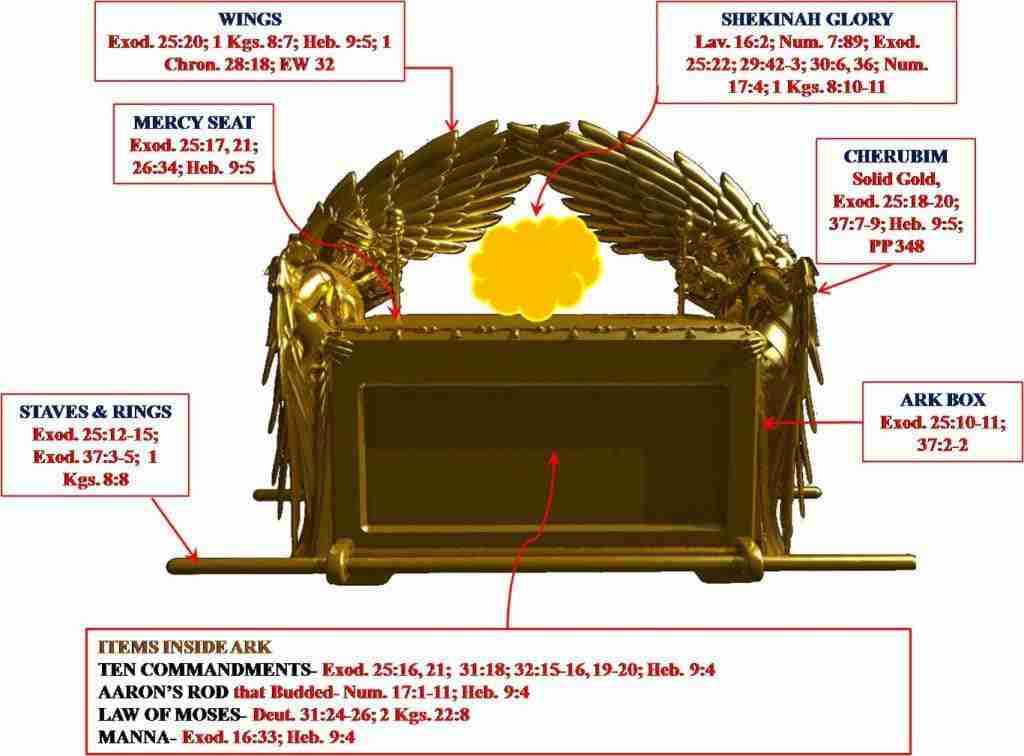 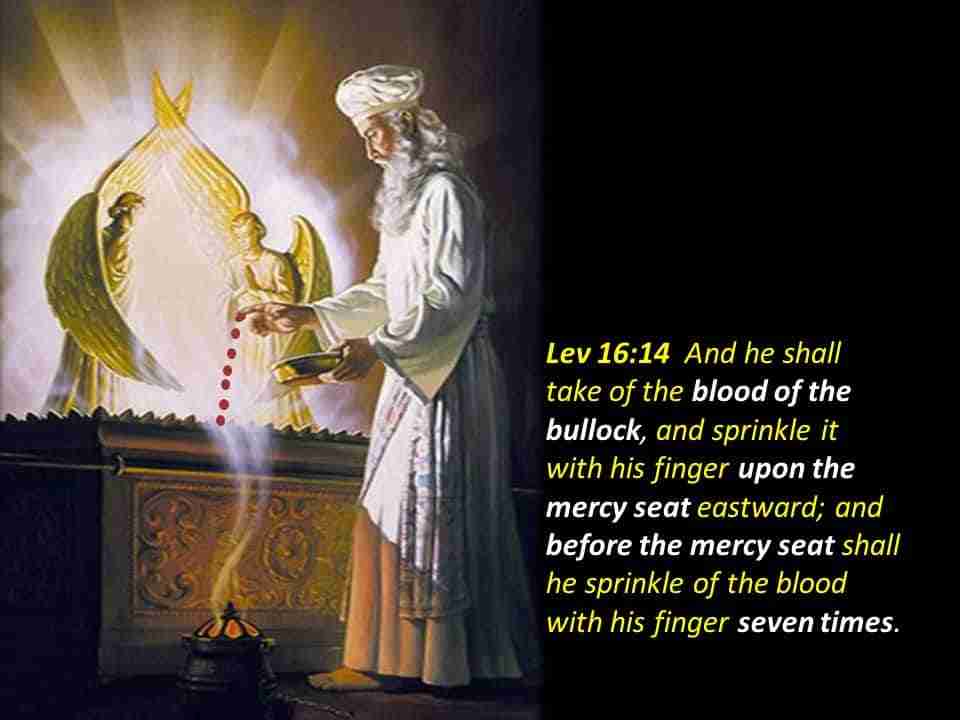 In the days of King David

At some point, King David had the Ark brought to Zion (is a placename used for Jerusalem) by the Levites. In Zion, David put the Ark in the tabernacle he had prepared for it, offered sacrifices, distributed food, and blessed the people and his own household (2 Sam. 6:17-20; 1 Chron. 16:1-3; 2 Chron. 1:4).

When Abiathar was dismissed from the priesthood by King Solomon for having taken part in Adonijah’s conspiracy against David, his life was spared because he had formerly borne the Ark (1 Kings 2:26). Solomon worshipped before the Ark after his dream in which God promised him wisdom (1 Kings 3:15).

During the construction of Solomon’s Temple, a special inner room, named Kodesh Hakodashim (Eng. Holy of Holies), was prepared to receive and house the Ark (1 Kings 6:19); and when the Temple was dedicated, the Ark—containing the original tablets of the Ten Commandments—was placed therein (1 Kings 8:6-9). When the priests emerged from the holy place after placing the Ark there, the Temple was filled with a cloud, “for the glory of the Lord had filled the house of the Lord” (1 Kings 8:10-11; 2 Chron. 5:13, 14).

When Solomon married Pharaoh’s daughter, he caused her to dwell in a house outside Zion, as Zion was consecrated because of its containing the Ark (2 Chron. 8:11). King Josiah also had the Ark returned to the Temple (2 Chron. 35:3), from which it appears to have been removed by one of his predecessors (cf. 2 Chron. 33-34 and 2 Kings 21-23).

The Babylonian Conquest and aftermath

In 587 BC, the Babylonians destroyed Jerusalem and Solomon’s Temple. There is no record of what became of the Ark in the Books of Kings and Chronicles.

*This Section Is Under Construction, We Will Be Back Soon. Thanks