Who Is In Heaven? 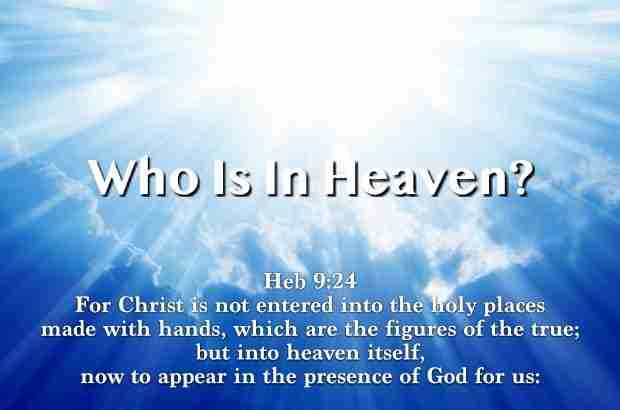 “For Christ…., now to appear in the presence of God for us:

“And no man hath ascended up to heaven, but he that came down from heaven, even the Son of man which is in heaven.”

How we understand this passage actually depends on how we determine who is doing the speaking in verse 13. These are either the words of Christ or the words of John, who is the actual writer and narrator telling the story.

“No man has ascended up to heaven but He (Jesus)…”

(But is verse 13 actually the words of Christ?)

Because of the sentence structure and punctuation marks, most of us are led to believe that Jesus was speaking from verses 10-21, in this 3rd chapter of John. If this were the case:

Then according to Jesus, no man (John 3:13) (or no human) has ever entered into heaven…. “except” – let’s just analyze this small portion of writing first and the exception.

There are several important facts to take away from this passage John 3:13.

1. Jesus is clearly and specifically speaking about humans only (“no man”); identifying which humans, if any, have or have not entered into heaven itself.

2. If we say this was Jesus speaking, Jesus is specifically proclaiming to be the ONLY man (the only human/the son of man), who has ever “ascended up” to heaven.

3. Although many are tempted to make an incorrect assertion, notably, this same passage does not (nor does any other scripture passage) reflect Jesus as proclaiming himself to be God: “but he, the “son of man” (the son of a human).

Note 1.  We know from scripture that fleshly humans did not (nor could they) literally exist in heaven prior to being a created being here on earth. If Jesus had existed in heaven prior to Bethlehem he certainly did not exist as the fleshly human son of David or Mary prior to his parents being created or birthed themselves. Jesus did not have a fleshly human father or mother who contributed to his birth up in heaven such that would make him a son of man (only in the thought/mind of God).

We know this because:

(1 Corinthians 15:50) “Now this I say, brethren, that flesh and blood cannot inherit the kingdom of God; neither doth corruption inherit incorruption“.

Note 2.  In this passage, the reference to “who came down from heaven” is arguably a matter of interpretation. It is better argued and supported that this is in reference to the fact the Jesus came from God (from heaven), that means we can substitute this phrase and replace it with “from God.” There are many scriptures that will prove this but I will provide just a few.

(John 3:34-36) “For he whom God hath sent (out into the world) speaketh the words of God: for God giveth not the Spirit by measure unto him (Jesus). 35 The Father loveth the Son, and hath given all things into his hand. 36 He that believeth on the Son hath everlasting life: and he that believeth not the Son shall not see life; but the wrath of God abideth on him.”

* (There is a clear distinction between God (the one that gave) and God’s Son (the one who received)).

(John 3:13 (NIV)) “No one has ever gone into heaven except the one who came from heaven—the Son of Man.” (Some manuscripts Man, who is in heaven)

By faith Enoch was translated that he should not see death; and was not found, because God had translated him (Hebrews 11:5). It should be noted that the Scriptures do not record the specific place to which Enoch was taken–only that he was taken.

And it came to pass, as they still went on, and talked, that, behold, there appeared a chariot of fire, and horses of fire, and parted them both asunder, and Elijah went up by a whirlwind into heaven. (2 Kings 2:11)

The word heaven, however, is used to refer to different things, namely the sky, the domain of the stars, and the dwelling place of God. It, therefore, goes to reason that Elijah was somehow carried up (arose) into the sky by an act of God, but there is nothing that would indicate he went to the Heavenly dwelling place of God.

(Job 14:12) “So man lieth down, and riseth not: till the heavens be no more, they shall not awake, nor be raised out of their sleep.“

Notice the word till in that verse. This means the dead will not, or cannot awaken until the “last day,” as Martha calls it when she is speaking of Lazarus (John 11:23-24).

(Acts 2:29,34) “Men and brethren, let me freely speak unto you of the patriarch David, that he is both dead and buried, and his sepulchre is with us unto this day. For David is not ascended into the heavens:…”

Keep in mind this verse is penned “AFTER” the death and resurrection and ascension of our Lord Jesus Christ. Many preach that everyone that was in the graves is in Heaven after the resurrection of Christ because they think He brought them all out of (Hell) when He was dead. Yet, this verse proves that they are indeed in error. Peter made it plain that the passage they were questioning (which was Psalm 16:10) in regards to the Lord not allowing His soul to stay in hell or His body to rot. The passage was indeed speaking of Jesus Christ ascending to Heaven, not David. For it is also explained in this same chapter of Acts.

(Acts 2:30-32) “Therefore being a prophet, and knowing that God had sworn with an oath to him, that of the fruit of his loins, according to the flesh, he would raise up Christ to sit on his throne; He seeing this before spake of the resurrection of Christ, that his soul was not left in hell, neither his flesh did see corruption. This Jesus hath God raised up, whereof we all are witnesses.”

(1Corinthians 15:20-23) “But now is Christ risen from the dead, [and] become the firstfruits of them that slept. For since by man [came] death, by man [came] also the resurrection of the dead. For as in Adam all die, even so in Christ shall all be made alive. But every man in his own order: Christ the firstfruits; afterward they that are Christ’s at his coming.

According to this verse, the dead in Christ will remain in their graves awaiting the order of resurrection. Jesus is the “firstfruits of them that slept“, then those that are believers in Jesus will “be made alive.” According to the Bible, they will have to be made alive in the order that the Lord set up. Jesus, the “firstfruits” and then those that are His followers, “at His coming.”

It is not until Jesus MAKES us immortal on that last day will we be able to “get out” of the grave on that day.

“No man has ascended up to heaven but He (Jesus)…”

There is another line of thinking debated among some scholars. So I think it is worth mentioning.

This belief is based on the understanding that John 3:13 is not indicating that Jesus was on earth and in heaven at the same time, but rather that Jesus did not speak the words recorded in John 3:13.

It is the belief that:

1. Because the past tense of the Greek verbs that follow verse twelve indicate completed events.

5. Because “who is in heaven” (v. 13) points to the fact that the Lord had already ascended at the time John wrote.

7. Because the break at verse 13 accords best with the context, as shown by the structure of the section.

Strong and straightforward evidence that Jesus is not speaking after verse 12 comes from just reading the verses in the Greek (and sometimes even the English) and paying attention to the verbs and the content of the verses. For example, verse 13 is very clear: “No one has ascended into heaven…except the Son of Man.” The verb “ascended” is in the past tense in both Greek and English, and shows us that Jesus had already ascended to heaven when this verse was written. This is confirmed by the last phrase of the verse, which says that Jesus “is” in heaven. The phrase, “which is in heaven,” has all the evidence of being original, and should appear in English Bibles as it does in the King James Version.

The verbs in verse 16 continue to show that Jesus’ death is in the past and that Jesus was not talking to Nicodemus but rather that verse 16 is the narrative of John (at this point many commentators agree, including the translators of the 2011 NIV, whose red letters stop with verse 15). The text clearly says that God “loved” the world and “gave” His Son. These things were already done, not future events. The serpent being “lifted up,” Christ’s being “lifted up,” that God “loved” the world, and that God “gave” His Son—all of these verbs in the aorist tense, and all references to past events. This is why even the English versions say God “gave” His Son instead of “will give” him.