11. The Divinity Of Christ: When Did Jesus Become Divine?

When Did Jesus Become Divine? 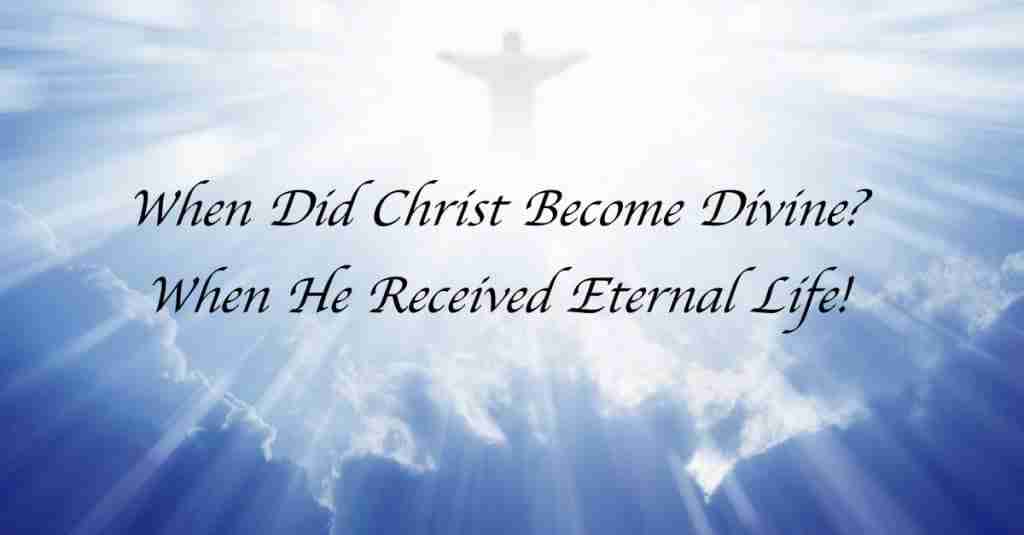 I had been asked to address several questions pertaining to Christ and his being divine. When did Christ become divine?

Was Christ divine before his Birth, during his baptism, or at his resurrection, when God resurrected Christ from the dead?

The Divinity Of Christ: (According to Scripture)

Rev 1:18 “I am he that liveth (is alive), and was dead (not alive); and, behold (but notice me now), I am alive for evermore (continual… ongoing… never ending… A Divine Nature)…”

2Pe 1:4 “Whereby are given unto us exceeding great and precious promises: that by these ye might be partakers of the divine nature, having escaped the corruption that is in the world through lust.”

Was Christ Divine before His Birth?

In the Old Testament, there are no passages that make this claim pertaining to Jesus being divine (In Hebrew the word “divine” (H7080) is not a word used to describe God and it does not mean “godlike,” as it does (G2304) in the two N.T. passages where it is found mentioned (2 Peter 1:3-4)). Any argument about the divinity of Jesus stemming from the Old Testament is baseless and certainly not spoken of in the O.T. scriptures.

Many assume the words “Divine” and “Deity” are synonymous, they are not. We can say the angels are Divine, but they are not Deity.  Likewise, the partaking of a divine nature depends on our decision to live in obedience to God while we are here on Earth, just as Jesus did.

Was Christ Divine At His Baptism?

Some say Jesus became divine at His baptism (Mat 3:16, Mark 1:10, Luke 3:22, John 1:32). Apparently, they consider the act of the receiving the Holy Ghost as being divine, but this belief is not well taken. It would then stand to reason that everyone who receives the Holy Ghost would also be considered divine.

In order to address these questions fully and correctly, we need to first establish who Jesus actually was and define the word “divine” in contrast to the word “anointed.”

According to scripture (attached below), Jesus went by three (3) titles, titles BY WHICH “HE” declared himself to be. If we are to declare Jesus to be someone (or something) it should be one of these three titles as stated by Jesus in the BIBLE.

The 3 most common titles were: “Son of God” or “Son of man” or “Man” – Never did Jesus ever call himself God or proclaim himself to be the incarnated body of God himself.

So, if your understanding of the word divine is someone who is proclaiming themselves to be “God Almighty” or any other type of god (God the Son, etc.), then the answer is NO, Jesus was not divine, at least not in that sense.

On Earth & In Heaven

Being Divine Is A Semantic Issue

Attempting to classify someone as being divine is actually more of a semantic issue.

When I speak (or think) of someone who is said to be divine, I tend to think of someone with supernatural abilities given them from God, which abilities they otherwise would not possess on his/her own power.

But this is probably not the best indication of someone who is said to be divine?

John 3:34 For he whom God hath sent speaketh the words of God: for God giveth not the Spirit by measure unto him.

*Everyone else, therefore, had less ability (limited measure) than Christ.

John 3:35 The Father loveth the Son and hath given all things into his hand.

Act 10:38 How God anointed Jesus of Nazareth with the Holy Ghost and with power <1>G1411 – Specifically miraculous power, usually by implication a miracle itself. This power is different than the power G1846 mentioned above, which is an authoritative power.: who went about doing good and healing all that were oppressed of the devil; for God was with him.

We know God is immortal (1Tim 1:17) therefore to be godlike (divine – G2304) one would also be immortal. Jesus did not truly become divine until God raised him from the DEAD and then he received ENTERAL LIFE!! To an inheritance in heaven that fadeth not away. (Ref. 1Peter 1:3-5)

* (Ref: Who Died Then Was Resurrected From The Dead, God Or Jesus?)

As stated above, when someone actually obtains what is called “eternal life” he or she truly becomes divine, possessing a divine nature (or godlike nature!!!) nonetheless, they do not become God or Almighty, just godlike!